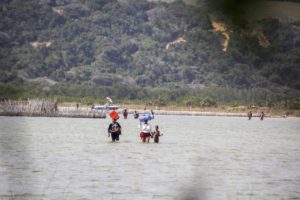 Durban, August, 17, 2016: The Department of Transport (DOT), the South African Maritime Safety Authority (SAMSA) and their partners have decided to postpone the Umhlabauyalingana Outreach Project until September 2016.

The decision to postpone the launch for the community of Enkovukeni, north of KwaZulu-Natal, scheduled to take place on August 20 comes after careful consideration of the needs of the community. DOT, SAMSA and its partners have decided to cast the net wider with their call to assistance to the private sector and other government departments to partner with them in bringing long term and consistent relief to the community.

This boost to the outreach program will give all involved and other prospective partners an opportunity to consolidate their efforts and come up with quality and long term solutions to this community.

Despite the postponement, the plans for revival for the area, is continuing and steaming ahead. Government representatives this week met with local leaders and community members. Back in Umhlanga, Durban students attached to the Maritime Centre of Excellence, part of the KZN Sharks Board, started building the vessels sponsored to the Enkovukeni Community.

“There is a need for interdepartmental responses into the challenges faced by the community. It is key for us to bring the private and public sector together to focus in on the area and provide the infrastructure required for their lives to be uplifted,” said Tilayi, adding the provision of boats will go a long way the community as the area was virtually only accessible by foot or make shift canoes which residents currently use.

“We will continue to monitor the progress of the work we have started and in September during the launch, the fruits of this public-private partnership will be realised. An intergovernmental task team will also be engaged to provide the much needed support.”

The KZN Sharks Board which hosts the Maritime Centre of Excellence has allocated two student groups, who this week started with the building of the boats. Among them were deaf students.

Vincent Zulu, Education Project Specialist, said: “We are using an old hull. We will add the rails, compartments, the seating area, steering, and built in oars. The boat would be able to seat 12 people. There are crocodiles and hippos in this dam, and during the raining season water is deep, which means the people have to walk around to find a shallow area to cross the river. The boat would be able to manoeuvre in deep areas and the risk of people being attacked would be minimised.”
As part of this initiative the centre will also execute a one week long SAMSA accredited skipper’s course to teach the community how to handle the boats and to help advance their aquaculture skills.

Mike Higgs, appointed by the KZN Sharks Board, as an examiner and surveyor said he was tasked to oversee that the boats were built in accordance with safety regulations.

“With the kind of floatation installed on the boat, a chunk could be knocked out of the boat and it would still be buoyant. It would be able to withstand a hippo knocking it over.”
Once the boats are released to the community, Higgs said skipper trainer Lucky Ndawo will be based in the area for a week teaching the locals how to commandeer the boats.

“This is an inspiring project to equip people with the skills they require for their everyday survival. We have previously carried out projects such as these in Port Edward and Ixopo.”

For regular updates on the Umhlabauyalingana Outreach Project, follow SAMSA on

The launch date and hand over will be announced shortly.

THE DEPARTMENT OF TRANSPORT:
The Department of Transport is responsible for regulation of Transportation in South Africa, that is, public transport, rail transportation, civil aviation, shipping, freight and motor vehicles.

SAMSA:
The South African Maritime Safety Authority (SAMSA) is a South African government agency established on 1 April 1998 as a result of the 1998 South African Maritime Safety Authority Act 5. As such it is responsible for the implementation of current International & National Regulations regarding the Maritime Industry as well as upon all recreational marine vessels within its jurisdiction. Part of SAMSA’s mandate
• To ensure safety of life and property at sea;
• To prevent and combat pollution from ships in the marine environment; and
• To promote the Republic’s maritime interests.