African maritime countries must work together

African maritime countries must work together

June 2, 2017
More African collaborations and international investment needed for continents’ maritime sector
Oslo, Norway: Meeting in Norway, African maritime delegates committed their countries to work together to collaborate efforts in developing the maritime economy on the continent.
Sobantu Tilayi, acting CEO of the South African Maritime Safety Authority (SAMSA) led South African delegates to one of the most prestigious international shipping events for maritime experts, the Nor-shipping Conference in Oslo, Norway. The Conference commenced on Tuesday, May 30, and concluded today, June 2.
SAMSA used the opportunity to showcase the vast potential that lies within South Africa’s fast-growing oceans economy.
Speaking from Oslo, Tilayi said delegates – from South Africa to Nigeria – understood the potential of accelerated growth if African countries worked together rather than separately as individual states.
“In a discussion with my Nigerian counterpart, Dr. Dakuku Peterside, the CEO of the Nigerian Maritime Administration and Safety Agency [NIMASA], we placed great emphasis in working towards achieving the African Union’s 2050 Africa’s Integrated Maritime (AIM) Strategy. Interestingly, at this conference through networking we were able to gather potential business opportunities worthy of exploration for South African maritime businesses. I immediately communicated with the concerned businesses and encouraged them to consider Nigeria as a commercially viable location,” he said.
Tilayi said the conference not only benefited those who were in attendance, it also benefited those maritime companies and organizations who were not present and could not form part of live discussions and interactions in Norway.
On advancing partnerships with maritime agencies from other African countries, Tilayi stated the conference not only exposed the country to an international audience of maritime investors, it also gave SAMSA an opportunity to engage with its African counterparts, particularly those from Kenya, Ghana and Nigeria.
He added the conference raised confidence that SAMSA would be able to realise the country’s ambitions in relations to South Africa’s maritime sector as stated in Operation Phakisa, a fast track delivery program to promote the ocean’s economy and the potential that lies within South Africa’s coastal line.
South Africa is a maritime country endowed with just of over 3200km of a coastline on which sits eight commercial ports, and some 1.6-million square kilometres of an Exclusive Economic Zone spread over three oceans from the Atlantic in the west, the Southern Ocean in the south and the Indian Ocean to the east.
“The conference gave us massive leverage in terms of strengthening our name as an investment destination. Through the conference, in one room, we had access to an audience that would have taken us two years to reach. We are happy to note that the South African Department of Trade and Industry was already engaging in talks with Innovation Norway [the investment agency of the Norwegian government] pursuing areas of partnership in the country’s maritime sector and other economic sectors,” asserted Tilayi.
Senior officials from the South African Department of Trade and Industry, South African International Maritime Institute (SAIMI), Nelson Mandela Metropolitan University formed part of South Africa’s delegation to the conference and were accompanied by local business leaders in the maritime sector.
The conference featured exhibitions, debates, product 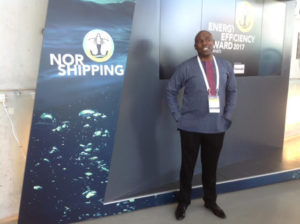 Notes for Editors
The South African Maritime Safety Authority (SAMSA), is a South African government agency responsible for the implementation of current International & National Regulations regarding the Maritime industry. It advises Government on maritime issues relating to or affecting South Africa, including but not limited to providing a search and rescue capability, and conduct accident investigations and provide emergency casualty response.