Press Release
Attention News Editors/Transport and Maritime Reporters
Over 1 000 rural learners empowered to enter the Oceans Economy
Pretoria, South Africa, June 27, 2017: On Sunday, 25 June 2017, the South African Maritime Safety Authority (SAMSA) in partnership with the Department of Transport (DoT) marked the international Day of the Seafarer (DotS) in the rural town of Bizana in the Eastern Cape to empower more than 1 000 high school learners from the area with information of how they can enter the maritime economy.
The DotS, marked by the International Maritime Organisation, seeks to recognise and celebrate seafarers worldwide. The DotS was in its 7th anniversary this year.
SAMSA in partnership other transport stakeholders including the DoT, Ethekwini Maritime Cluster (EMC), South African International Maritime institute (SAIMI), Road Accident Fund (RAF), Road Traffic Management Corporation (RTMC) set up a special exhibition on the day to expose the learners to the various career opportunities available in the maritime industry and the broader transportation industry.
The exhibition was followed by a DotS main event which was characterized by a series of moving lectures which sought to present the maritime industry as a viable career option to the learners.
Among the maritime sector stakeholders, dignitaries and officials in attendance were Clement Manyangwa, Acting Deputy-Director General of the DoT; Phumlani Myeni, SAMSA Acting Chief Executive Officer and Sobantu Tilayi, SAMSA Chief Operating Officer.
In his address Tilyai sought to inspire the learners in attendance to consider joining the more than 1,5 million community of seafarers worldwide.
“Life as we know it depends on shipping. At the core of the formation of civilization there has always been a need for transportation. This is an important career field for you to consider as the future generation of professionals.
“Seafarers are responsible for transporting about 90% of commodities – such as food items, clothing, cars – which we use in our everyday lives. Seafarers are a pivotal asset in the global trade economy,” continued Tilayi.
Tilayi added that benefits of seafaring could be lucrative.
“Seafarers don’t pay tax. Not only do they get to perform the admirable task of transporting important cargo which contributes in our daily living, they also get paid in dollars.”
At a press conference which followed the main event, Tilayi assured the media that current maritime jobs were sustained in the foreseeable future as the international maritime community, persuaded by the ‘African bloc’, recognized risks such as increased unemployment and piracy if they allowed the commercialization of unmanned ships solely controlled by technology or robots and without any seafarers on board.
Manyangwa said: “Today, our aim is to make some contributions that can have an impact to the community here in Mbizana and outlying areas. We would really like to make an impact on the livelihoods of young people through educational initiatives, maritime heritage, skills development and training opportunities that will ultimately make an impact in your lives,” continued Manyanga.
“To you, learners from the greater Alfred Nzo Education District under the Mbizana Local Municipality, you may have heard about the sea, maybe not, but I want to say to you today, the sea is a vibrant economical hub waiting to be explored.
“I invite you to go around the exhibition stalls here today to have a better understanding what the sea – the blue oceans economy stands to offer you,” asserted Manyanga.
SAMSA activated this year’s social media campaign which can be accessed through the following social media platforms.
Facebook:
Page: Day of the Seafarer & South African Maritime Safety Authority
Twitter:
@SAMSAMARITIME under the hashtag: #SeafarersMatter #SAMSACares #OceansEconomy #SASeafarers
Ends
Issued by FBI Communications on behalf of SAMSA
For interviews and further information, please contact Farhana Ismail, on +27-827876987, email (info@fbicommunications.com)
For updated information go to
WHAT IS SAMSA
www.fbicommunications.com, News Room Section

Notes for Editors
The South African Maritime Safety Authority (SAMSA), is a South African government agency responsible for the implementation of current International & National Regulations regarding the Maritime industry. It advises Government on maritime issues relating to or affecting South Africa, including but not limited to providing a search and rescue capability, and conduct accident investigations and provide emergency casualty response.
Mbizana is a rural village in the eastern region of the Eastern Cape Province, and precisely, the birthplace of two of the country’s globally recognized liberation struggle stalwarts; Oliver.R.Tambo and Winnie Madikizela-Mandela. The village of Mbizana is located within the Mbizana local municipality in the Alfred Nzo District in the Wild Coast Region of the Eastern Cape. This municipality is made up of a main town and surrounding villages, located in the Eastern Cape on the R61 road connecting the KwaZulu-Natal south coastal boundary to the N2 highway with a population of just under 300 thousand people.
According to the 2011 census, the district had a 43 percent overall unemployment rate with the youth unemployment rate standing at just over 52 percent. 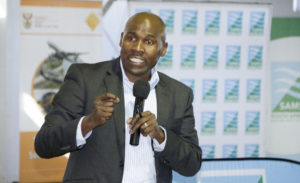