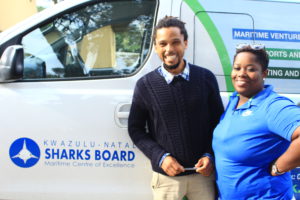 June 7, 2017, Port St Johns, Eastern Cape: Focused government interventions have been ploughed into the Port St. Johns area in the Eastern Cape to reignite local marine tourism, boost the economy and provide much needed water skills for the youth.
The South African Maritime Safety Authority (SAMSA) as part of its Corporate Social Investment initiative (CSI), together with the KwaZulu-Natal Sharks Board Maritime Centre of Excellence (KZNSB MCoE) and Port St. Johns (PSJ) local municipality officially launched the first stage of the Youth Maritime Development Programme (YMDP) in Port St. Johns on Tuesday (04 July 2017). This multi-stakeholder initiative is aimed at equipping unemployed young people, residing within PSJ, with skills and opportunities to participate in the country’s marine tourism sector.
The initiative is in line with Operation Phakisa: Oceans Economy – Coastal and Marine Tourism sub-sector to boost employment and open new frontiers for marine tourism while creating much needed jobs.
Youths in the area are being offered a series of lectures and practical training in skills such as deep sea diving, spear fishing skills, lifeguarding (to include first aid) and commercial diving training. On completion of the project the trained youths will be in a position to be employed at other Ports outside their local municipality.
Coastal and Marine Tourism
Marine tourism currently ranks among the top four sub sectors of the country’s maritime economic pillars. It is projected to generate between 800 000 and 1-million jobs by 2033. In economic terms, projections currently indicate yields as high as R44-billion in 2020 and rising rapidly to R134-billion in 2033.
Port St. Johns is one of the coastal towns earmarked to benefit from the “Small Towns Regeneration Plan” of the national Department of Public Works.
Councillor Lindelwa Rolobile, Mayor of the Port St. Johns Local Municipality, said the municipality had received R97 million from the national Department of Tourism for the 2017/18 financial year to boost the local tourism industry.
“As the municipality, we have approved plans which seek to revive the local tourism industry and related industries such as the retail and hospitality industries. In these plans, lie the opportunities for the young people currently being trained through the YMDP,” said Rolobile.
Phumlani Myeni, SAMSA Acting CEO, said the CSI initiative meets Operation Phakisa’s objectives. It was pivotal that more young people entered the marine tourism sector and for all the relevant stakeholders to open up the sector to allow skilled and talented youths an easier access into the sector, he said.
“The marine tourism sector is a very large industry with an abundance of opportunities waiting to be explored. As SAMSA, we stand ready to support anyone who wants to participate in the sector and contribute in further developing it with the aim of propelling South Africa’s ranking as a marine tourism destination.” said Myeni.
The PSJ area covers a population of about 166 779 people. 33% of young people from the area are unemployed. The area has 12 beaches and the Umzimvubu River which require lifeguards. However, there are only 5 registered life guards currently operating in the area making the area one of the most compromised stretches of our coastline in terms of Safety of Life and Property at Sea.
On Tuesday, 33 youths who had passed the pre-screening tests conducted by the Sharks Board were taken through the course outline and inducted into the YMDP.
Vincent Zulu from the Sharks Board, which is facilitating the lectures and practical training, said the 33 youths are the first group of the 104 youths earmarked to receive training. Their training will take eight weeks to complete.
In total 33 youth will be trained and then graduate on September 25, which coincides with the global commemorations of the World Maritime Day.
“The second stage of the project will thereafter kick off and be completed in December,” said Zulu.
“We are not only equipping the youths with just skills of diving and lifeguarding. We are also teaching them leadership skills as well as entrepreneurship in marine and coastal tourism,” said Zulu.
Sharks Board will work with SAMSA to look for placement and career opportunities for youths who would successfully complete the training.
Nolubabalo Busuku, Chief Executive Officer for the Port St. Johns Development Agency, said: “The YMDP is an exciting project because it contributes to the efforts of propelling Port St. Johns to become one of the premier tourism destinations in South Africa.”
She hoped the project would expand to other municipalities within the O.R. Tambo District Municipality. “This YMDP is very special because it is accredited by the relevant institutions and the people that are facilitating the training have on-the-ground experience.”
The training schedule is as follows:
Event Duration
Coastal and Marine Tourism Training 04 – 06 July 2017
Youth Leadership Training 07 – 09 July 2017
First Aid Training 11 – 14 July 2017
Open Water Diving Training 17 – 21 July 2017
Advanced Diving Training 24 – 28 July 2017
Entrepreneurship Training 31 July 2017 – 04 August 2017
Practical Diving (for qualifying into Master Scuba Diving Training) 07 August 2017 – 01 September 2017
Master Diving Training 04 – 15 September 2017
Issued by FBI Communications on behalf of SAMSA
For interviews and media tours, please contact Tankiso Moshoeshoe, on +27 – 0827876987/0793176850, email (info@fbicommunications.com)
For updated information go to SAMSA, https://blog.samsa.org.za/
And www.fbicommunications.com, News Room Section

Notes for Editors
The South African Maritime Safety Authority (SAMSA), is a South African government agency responsible for the implementation of current International & National Regulations regarding the Maritime industry. It advises Government on maritime issues relating to or affecting South Africa, including but not limited to providing a search and rescue capability, and conduct accident investigations and provide emergency casualty response.