SAMSA coordinates rescue of 30 crew on board Taiwanese vessel

Durban, South Africa, July 11, 2017: The South African Maritime Safety Authority (SAMSA) is co-ordinating a rescue effort in the Indian Ocean after a Taiwanese fishing vessel, the Hsiang Fuh no. 6, with 30 crew on board, caught fire off the coast of Madagascar.

The survivors, some with slight burns, will be arriving in Durban today (11 July). The incident happened on Sunday, July 9.

The Maritime Rescue Co-ordinating Centre in Cape Town (MRCC CT) was notified that a container ship, the Ever Diadem, spotted the Hsiang Fuh no. 6, about 10km away from its position. The Hsiang Fuh was on fire and its crew were abandoning ship on two life rafts about 736km East-North-East from Durban and 496km from the closest shore.

The MRCC CT requested the Ever Diadem to recover the survivors. An urgent request (MAYDAY) message was relayed for other vessels to assist in the rescue.

All the survivors were picked up – 16 crew by the Ever Diadem and 14 by the SBI Antares. Both vessels proceeding to Durban to disembark the survivors. A warning was issued for the abandoned and unmanned vessel still adrift.

The necessary arrangements for the safe delivery and repatriation of the sailors, Philippine, Indonesian, Taiwanese and Vietnam, were made and they would be met by representatives of their countries on arrival in Durban.

MRCC CT engaged in efforts to evacuate one of the crew that suffered burns from the Ever Diadem, 60 km off Durban. The air medical evacuation was done with the assistance of the South African Air Force and NetCare Paramedics. NSRI Durban provided surface support. The casualty has been safely recovered and taken for hospitalization.

SAMSA commends the efforts of the Masters and crew Ever Diadem and SBI Antares in saving the lives of the crew of the fishing vessel.
Ends 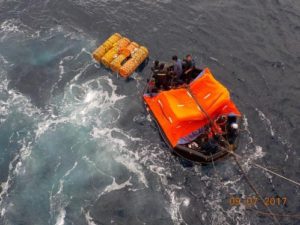 fire rescue efforts by SAMSA on board the Taiwanese Fishing Vessel, HSIANG FUH NO.6. 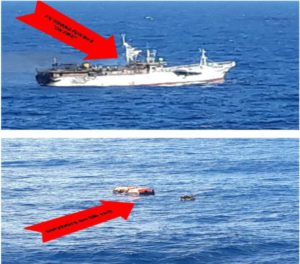