The Pavilion uses its privilege to do good to society

SAMSA is at the forefront of coordinating a search and rescue for seven missing fishermen whose boat capsized this morning.
Please see enclosed

Search and rescue for missing fishermen to resume

Pretoria, South Africa, July 16, 2017: The search and rescue and shore based searches for the missing seven crew members of the fishing vessel the FV “Maredon” will resume at first light tomorrow morning (17 July 2017).

The South African Maritime Safety Authority’s Maritime Rescue Coordination Centre, based in Cape Town (MRCC) is busy coordinating the rescue effort for seven crew members of the Maredon, a chokka fishing boat, which capsized at sea off Cape St Francis in the Eastern Cape in the early hours of Sunday morning.

SAMSA can confirm the vessel has been reported to have washed ashore with four deceased inside, five swam to shore and is being assisted by Private Care Ambulance. The sister vessel to Maredon had sighted a deceased crew member but he could not be recovered. Eight of the 16 crew has been accounted for. Two survivors were rescued by other vessels.

Prevailing weather conditions are hampering search and rescue efforts. Wave heights of up
to five metres and wind speeds of almost 50 km/h is being experienced.

The NSRI St Francis Bay duty crew were activated by MRCC at about 3.30am following reports of red distress flares reported by chokka fishing vessels at sea off-shore of Thyspoint.

The MRCC received a report of a Red Flare sighted approximately 1 and a half kilometers from shore in the Cape St Francis area at 3 am Sunday Morning. The fishing vessel “Silver Eagle” reported this possible distress and was requested to investigate.

An urgency broadcast was made to vessels in the area to report distress or additional flare sightings.

SAMSA’s Chief Operating Officer Sobantu Tilyai said: “We also received an Emergency Position Indicating Radio Beacon (EPIRB) detection and the distress position related to the Red Flare sighting. The EPIRB information was delivered by COSPAS-SARSAT – the search and rescue satellite system which forms part of the Global Maritime Distress and Safety System. The FV “Maredon” was confirmed to be in distress.”

The “Silver Eagle” reported additional flare sightings and arrived at the incident scene. MRCC received notification that a life raft was sighted and it was confirmed that the “Maredon” had capsized. MRCC had been in contact with the vessel owner who had provided the number of crew on-board and made the sister ship, the “Mageldon” available for search and rescue efforts.

Police had opened an inquest docket and SAMSA would launching an investigation.

SAMSA expressed its sincrere condolences to family, friends, and colleagues of the deceased fisherman. 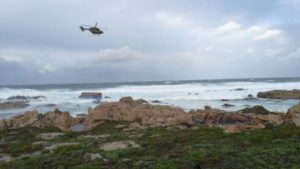