You are invited to join us in Qumbu tomorrow to celebrate and honor the aged of our community.

July 18, 2017, Qumbu, Eastern Cape: The South African Maritime Safety Authority (SAMSA) will bring some cheer to the elderly residents of Qumbu in the Eastern Cape on the 19th of July 2017.

In recognition of Mandela day 2017 SAMSA has embarked on a nationwide Blanket drive. The Blanket drive under the theme SAMSA Cares will see the authority donating over 500 blankets to the elderly and other vulnerable members of the community in all the regions where it operates.

The SAMSA Blanket Drive will culminate with the donation of one hundred Blankets to the elderly in Qumbu on Wednesday 19 July. The SAMSA Chief Operations Officer Sobantu Tilayi will lead a delegation that will interacting with the older members of the community in a blanket handover event to be held at Tsitsa Falls.

Apart from the donating Blankets and other much needed supplies to the community this event is aimed at shining a light on this picturesque part of South Africa in line with SAMSA’s push for South Africa to recognise the potential that lies in the Marine Coastal Tourism sector.

Members of the media wishing to join the COO of SAMSA can confirm their attendance to Chwayita Mncwini on 0627973871 or Tankiso Moshoeshoe on 0793176850.

The event will start at 11am. Lunch will be served.

Please note travel will be provided for the media if required.

The Tsitsa River rises in the Drakensberg 15 km to the SE of Rhodes, about 80 km west of Mount Frere, and flows eastwards. The Tsitsa Falls are located in its upper course, amidst a mountainous area of great beauty. Bending and flowing southwards for a few miles, the river passes east of Maclear, before it bends eastwards again. Finally it empties into the Mzimvubu River while passing through deep river gorges about 36 km southeast of Qumbu. Its main tributaries are the Mooi River, Inxu River (Wildebeesrivier) and the Pot River. The Tsitsa River used to form part of the western border of the former Transkei. Now the Tsitsa is a popular place for whitewater kayaking. 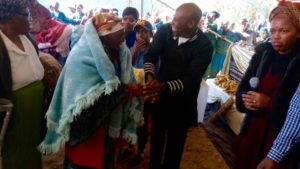 Chief Operations Officer for the South African Maritime Safety Authority, Sobantu Tilayi handing over blankets to the elderly in Qumbu. 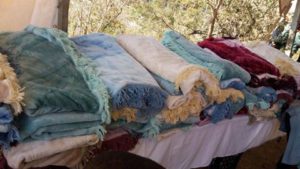 Blankets handed over by the South African Maritime Safety Authority. 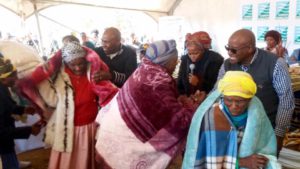 SAMSA delegates handing over warm fuzzy blankets to the communtiy of Qumbu. 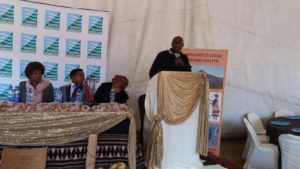