All News Editors/Maritime Reporters
SAMSA continues coordination of Durban’s mop up in harbour
October 10, 2017: Durban, South Africa: The South African Maritime Safety Authority, working with the Transnet National Ports Authority in the emergency response operations within the Port of Durban today (Tuesday), will continue to monitor Durban’s and the coastal weather and sea conditions.
Chief Operating Officer for SAMSA, Sobantu Tilayi confirmed together with TNPA, SAMSA provided technical support during the multi vessel emergency operation. This was as a result of the major storm that hit Durban at about 09h30 this morning.
Tilayi said: “Our principal officer from SAMSA Durban office, Captain Hopewell Mkhize together with the Port of Durban Harbour Master, Captain Alex Miya convened a Joint Operations Committee which managed the emergency response operations. Five container ships in total were affected. We will continue monitoring weather conditions along the coast and monitor the situation in Durban for the next 48 hours.”
He said the Minister of Transport, Joe Maswanganyi, has been kept abreast of the emergency response and salvage operations.
An emergency meeting was convened at approximately 11h30 today with Mkhize and Miya to form a joint command and engage on the refloating for the vessels MSC Innes, SM York, Bow Triumph and SA Shipyard floating dock with the new harbour tug. The meeting also dealt with vessels MSC Susanna and Maritime Newanda that broke moorings and had to be held by harbour tugs to prevent them also running aground.
The vessel, MSC Innes took priority as it blocked the port entrance. It took 5 tugs to refloat the 330 metre long container vessel and once refloated, she was allocated a berth in the port for damage inspection.
The vessel, Bow Triumph, a 183 metre long product tanker, which was berthed in Island View broke its moorings and ran aground on the sand bank near the Island View Terminal. The vessel was refloated at 16h30 and it took further effort to clear the anchors which were still stuck. All refloating operations were completed at 17h30 and the vessel was allocated a berth overnight for damage inspection.
The vessel, MS New York, a 330 metre long container vessel, which ran aground near Maydon Wharf was also refloated successfully and was allocated a berth for damage inspection.
By 7pm tonight the vessel, MSC Susana, which had earlier broke from its mooring ropes, was secured.
The Maritime Newanda vessel which broke loose was held by tugs and is currently berthed at Maydon Wharf.
The SA Shipyards’ floating dock and new tug remain grounded on bank. It will be attended to in daylight hours.
TNPA reported that there was a straddle carrier which was blown into the water and remains unsecured. There are also reports that some cranes were derailed by strong winds. Of concern, according to Tilayi, are reports that there were about three containers believed to have been lost into the water with the exact position unknown. These pose a danger to navigation within the vicinity. TNPA confirmed that a search will be conducted in daylight hours.
There were no injuries no pollution reported on all the above incidents. Durban Port was closed due to debris in the water and unknown position of some containers which pose danger to navigation and damages to vessels.
“We are pleased with the overall cooperation from all stakeholders and the swift action to ensure the safety of people and equipment. More importantly is the demonstration of emergency preparedness that was displayed during this major incident. It is the first time that we have had to attend to this number of casualties simultaneously.
“We are pleased by the reaction of TNPA and their handling of the incident. We are increasingly getting confronted with deteriorating weather patterns and can expect similar incidents in the future given the effects of climate change. It was a saving grace that all this took place within the harbour where all resources are concentrated, it could have been worse if it was over a large open sea area. A full SAMSA report will be done once all salvage operations are completed,” Tilayi said.
Ends 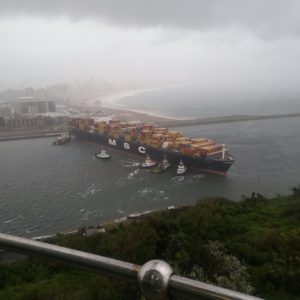 Container vessel aground in Durban Harbour on Tuesday, October 10, 2017