The lives of 22 crew from a distressed fishing vessel were saved this morning – minutes later their boat sank. SAMSA’s MRCC coordinated the rescue efforts near Danger Point off the Cape South Coast.

For interviews and queries please contact Farhana Ismail on 0827876987/farhana@fbicommunications.com

The fishing vessel Ellis S, owned by Sevlak Investments, sunk after the crew was rescued.

The vessel took in water. Approximately three to four meters waves with wind blowing at around 30km per hour was experienced.

MRCC received a distress signal at 00h:49am this morning (Friday) via the Maritime Radio Service, that the fishing vessel was taking in water and starting to sink.

MRCC Chief, Jared Blows said they acted promptly to coordinate the rescue. “MRCC also used the Automatic Identification System installed at the centre for monitoring vessels to quickly identify which vessel it was and as well contacted vessels that were in close proximity to the scene.”

“Vessels that were identified to be the closest to the scene were requested to change course to the location to assist.”

First on the scene was Singaporean flagged motor tanker Aral Sea, followed by the I&J fishing vessel Fuchsia, and lastly the Realeka.

The Fuchsia, even with waves breaking over the stern of the partially submerged Ellis S, was able to go alongside it and transfer all 22 crew on board.

The Aral Sea stood by and provided lighting using its spotlights thereby enabling an easier handling of the transfer.

All crew members were brought to safety on board the Fuchsia at 02h38 on Friday morning. The distressed vessel sunk at 03h30 after the crew was saved from it.

The National Sea Rescue Institute was initially dispatched to assist. However, nearby ships came to the rescue.

“Rescue efforts concluded at 08:24 this morning when all rescued crew were landed safely ashore in Hermanus.”

The Fuchsia proceeded towards Hermanus.  With the assistance of the NSRI the crew of the Ellis S were taken ashore to waiting medical services and other relevant authorities who attended to them.

SAMSA will conduct further investigations as to what caused the vessel to flood and eventually sink. 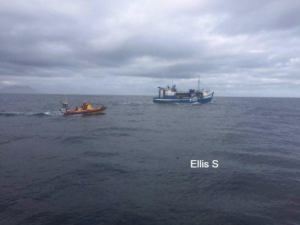 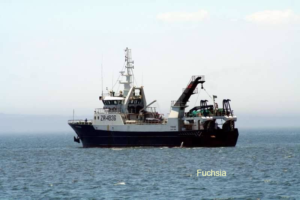