The vessel, which is the South African Maritime Safety Authority’s (SAMSA) dedicated training vessel, sailed to the Antarctica on November 24, 2017, via Port Louis carrying 20 cadets who are enrolled at various institutions pursuing maritime studies.   The vessel was chartered by an Indian science team who boarded the ship at Port Louis, Mauritius. The ship spent approximately one month in the Antarctica

The SA Agulhas, an ice strengthening ship, has been performing well during the voyage. The SA Agulhas which is 41-years-old, has undertaken more than 10 missions to Antarctica. Captain Michael Barnes is the current master.

About 40-47 scientists from the Indian National Centre for Antarctic and Ocean Research joined the cadets on the expedition to carry out oceanographic research.

During the stopover at Port Louis, Mauritius, the vessel carried out minor repairs. A wash-up meeting was held in Port Louis in which the charterers (scientists) expressed their thanks for the support given to them during the voyage which was a great success.

The research team was headed by Doctor R. K. Mishra from in Goa, India.

SAMSA’s Chief Operations Officer, Sobantu Tilayi said: “As SAMSA we are proud to have created a platform for young cadets to be trained on our vessel and gain experience in the open sea.

“She has been doing well on her journey and we are confident that the knowledge that was acquired through this journey will benefit the students. Through such missions we also hope to push for greater employment opportunities for our youth.”

Issued on behalf of SAMSA by FBI Communications

For profiles and pictures on the cadets go to www.fbicommunications.com/newsroom

The SA Agulhas 1 is a Dedicated Training Vessel that is a pioneering initiative and South Africa’s first fully operational dedicated training vessel. The vessel, built in 1977, is an educationally equipped and on-the-job learning set-up that enables South Africa to join the ranks of the elite maritime countries.

The SA Agulhas was previously used to service three South African National Antarctic Programme research bases. She was retired from Antarctic service in April 2012 and was replaced by SA Agulhas II. She was transferred to the South African Maritime Safety Authority as a Dedicated Training Vessel with trading capabilities. 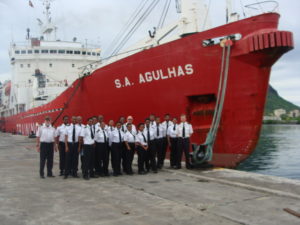 All aboard: The SA Agulhas is in Port Louis today and will set sail tomorrow for South Africa 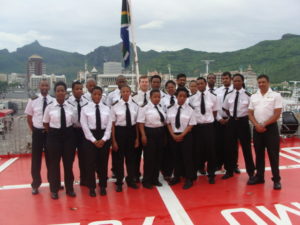