SAMSA hosted maritime stakeholders in Cape Town this week where they were addressed by SAMSA’s Chief Operations Officer, Sobantu Tilayi about developments and challenges in the sector.

Please see the pictures with the press release below.

Speaking at SAMSA Annual Networking Dinner in Cape Town on Wednesday Tilayi added that, Operation Phakisa’s fast-tracking program for the building of the oceans’ economy prompted the maritime sector to maximise the benefits that could be achieved.

South Africa is surrounded by a vast ocean where maritime role players have not fully taken advantage of the immense potential of this untapped resource. The oceans have the potential to contribute up to R177 billion to the gross domestic product (GDP) and create just over one million jobs by 2033.

But the benefits of the sector could not be realised if there were no willing players to effectively participate and show courage towards building the oceans economy.

Tilayi proposed various ways in which South Africa could improve and capitalise on the maritime sector. These included offshore bunkering, and energy generation, among other efforts.

The annual networking session was attended by over 60 guests from the private sector and various state entities. The platform allowed stakeholders to discuss the state of the maritime sector, and touch base with key players in the industry.

Benefits in the sector

Tilayi said offshore bunkering, for instance was a lucrative endeavour to venture into.

“South Africa is ideally placed to take advantage of the “West to East” (ship) traffic by offering offshore bunker services. SAMSA approved a pilot off the shores of Port Elizabeth last year, which showed great potential if it were to be done right,” he said.

Millions of tons of marine fuel were delivered resulting in potential revenues in billions of rands. “We now know that these operations can be done relatively safely off the coast of Port Elizabeth but we need to further tighten the controls in order to ensure the sustainable use of the marine environment,” he added.

With energy generation, South Africa lagged behind when it came to wave energy power generation technology.

Tilayi said: “It is important to augment our energy mix as a country. Although coal or hydrocarbons will continue to play a dominant role in the near future, our development or collaboration in the development of these alternate technologies has benefits such as climate change management, skills development and creation of new industries for economic growth.”

Through SAMSA’s engagements with various shipping companies it was pushing for greater employment opportunities for South African youth, such as the Maritime Youth Development Program.

This is a program in partnership with the Mediterranean Shipping Company, Harambee, the Eastern Cape Government and Port St Johns Municipality to train youth, mostly new matriculants, in the global cruise liner industry. So far up to 120 youth have been trained and placed in jobs on various ships around the world.

“Our focus is to create employment for youth and raise maritime awareness. Seafarer development initiatives as envisaged in Operation Phakisa are yet to bear fruits on a sustainable basis. We remain committed to extending the economic benefit of the maritime economic boom to the rural communities,” Tilayi added.

Following the torrential storms in Johannesburg and Durban, which claimed many lives and caused massive destruction, Tilayi said South Africa needed to improve on its early warning systems and mitigation measures.

“Several ships lost their moorings in the Durban harbor with several containers gone missing, causing environmental risk. We are currently dealing with that and would like to thank the MSC and their service providers.”

The fishing sector remained South Africa’s biggest worry. The fishing industry was the major stakeholder and SAMSA wanted to engage more regularly and effectively with it. In that regard SAMSA will convene a National Fishing Forum to further hear from the fishing industry.

Captions for images: (Supplied by SAMSA)

662A3072: Stakeholders discuss various way in which South Africa can capitalise on the lucrative maritime economy. 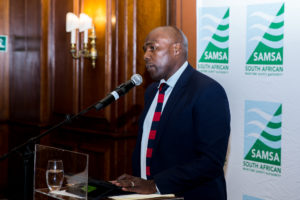 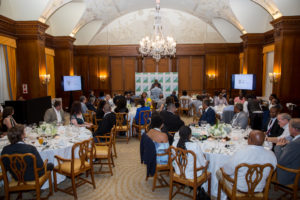