We throw back to the past as we await the arrival of 20 cadets who are returning from the Antarctica this week on board the same vessel. Over the next three days we will be profiling former cadets who trained on the SA Agulhas and are now thriving in the maritime sector.

Six years ago, the three were part of the first batch of 50 cadets who joined explorer Sir Ranulph Fiennes and his team on The Coldest Journey to the Antarctica. They travelled from Africa to London and to the Antarctica on this expedition.

Meet Cape Town mother, Shuneen Van Niekerk, who strives for success in all her endeavours.

Van Niekerk (26) is currently working as a trainee tug master for Transnet at the Port of Cape Town.

Van Niekerk was part of the first batch of the cadets who joined Sir Ranulph Fiennes and his team on The Coldest Journey to the Antarctica six years ago on board the SA Agulhas, the dedicated training vessel managed by the South African Maritime Safety Authority.

The Coldest Journey was the first ever attempt to cross the Antarctica in winter.

SAMSA, she said, had created a platform for her to pursue her dream. “When SAMSA announced the Cadetship Programme on board the SA Agulhas in 2012, it gave me hope as an unemployed young person who was looking to complete my sea time practical studies.  It was an opportunity for us cadets to start our practical training and gain experience in the open sea,” said Van Niekerk.

Van Niekerk and her cohort of cadets travelled through Africa to London and finally to the Antarctica.

Speaking about her experience in the Antarctica: “When we were on the SA Agulhas, it was a homely and friendly environment. What I learnt on the Agulhas helped prepare me for the further vessels I was deployed on. I met people from different backgrounds and nationalities in later years. It was challenging in the beginning but eventually you get used to it.”

Being only 21-years-old when starting her maritime career, she said: “We went through calm seas all the way down to Antarctica. We had a chance to go onto the ice and experience it ourselves. At first it was like you were in a fridge. We were surrounded by ice. It was something new.”

Thriving in the maritime sector

After Van Niekerk completed her training on the SA Agulhas in 2013 she joined SAF Marine Maersk to complete her sea time until March 2014.

After completing her sea time she took the rest of 2014 off to give birth to her son.

In 2015 she re-joined the SA Agulhas for one month to familiarise herself with the ship-board life again and prepare herself for her Class Three (international ticket) oral exams – an international ticket means you can work on any vessel, anywhere in the world.

As she remained driven and determined to reach her end goal which is to become a tug master, she went back to university to complete her semester three (S3) and semester four (S4) in maritime studies at the Cape Peninsula University of Technology.

She completed her studies and graduated in March 2017. In the same year she started working as a training tug master.

As part of her achievements she has her Class Three Officer of the Watch Certificate which she received in May 2017, and a National Diploma in maritime studies.

She has been working at the Port of Cape Town since November 2017.

She added how working in the sector also had it perks as she shared a rough estimate of how much a training tug master earns.

She called on the youth to join the maritime field.

The 26-year-old also called out for more schools to include maritime studies in their curriculum.

Van Niekerk aspires to become a marine pilot in the near future. 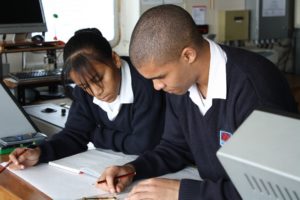