In our last instalment of the throwback from the past, we meet Siyabonga Mgojo who is living the dream working now as a chief officer in the maritime field. His advice to the young cadets heading back on Friday on the SA Agulhas to South Africa: “The water is your workplace. Be brave and venture out.” 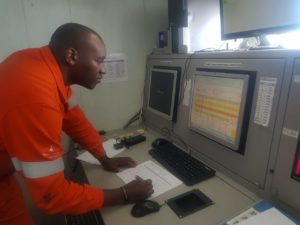 From Matatiele to the Antarctica

Meet the ambitious and adventurous chief officer, Siyabonga Mgojo, a Durban Based chief officer who is currently working for African Marine Solutions (AMSOL).

Growing up in a small township, Mgojo was a young man with a dream of sailing the seven seas and working on ships.

Mgojo, 26, who is now a father of one, was part of the first batch of cadets who traversed through Africa, Europe and the Antarctica on the the Coldest Journey on board the SA Agulhas six years ago.

The Coldest Journey was the first ever attempt to cross the Antarctica in winter.

The SA Agulhas, the dedicated training vessel belongs to SAMSA and Mgojo said the authority made his dream come true and more doors have been opened before him.

“I was fortunate to be part of SAMSA’s programme because it was through that journey I had the opportunity to learn and witness ice navigation, which is one skill most training cadets across the world do not have. The experience also helped me grow and feel special because not many people get the opportunity to travel to the South Pole and being a small boy who grew up in Matatiele this transformed my life. This also opened doors for me in the maritime industry,” said Mgojo.

Reminiscing on his experience when he first set foot on the coldest continent he said: “It was a trip that took us to the end of the earth and one that definitely set us apart from ordinary seafarers.

“No words can describe how beautiful the Antarctica is. It felt like a dream for me at first because, here I was just a local township boy far away from home experiencing what I grew up seeing on television.”

He said: “The experience on board also helped us know how to operate on foreign ships as we were taught how to complete tasks step by step and worked hand in hand with our trainers to complete practical work.”

The cadets also travelled with an ice research team from Europe.

Excelling in the maritime field

Mgojo completed his maritime studies at the Durban University of Technology.

In that same year he was hired by AMSOL to be a Utility Deck Officer.

In 2015 he was later promoted to Chief Officer which is the second in command for the Master of a ship.

Speaking about his experience in the working world he said: “It was challenging at some point. But from those challenges I experienced growth and I overcame all the obstacles placed before me mainly because of the training we received on board the SA Agulhas. Being in this sector has always been what I wanted and because of determination, doors are opening for me.”

Calling on young people to consider careers in the industry Mgojo shared: “There are more opportunities opening for young people as the maritime industry in South Africa is gaining momentum. We need young people to join us. Our ports are expanding and more vessels will be registered. This means that more jobs are being created and more cadets will be needed.”

Sharing some of the advantages of being the maritime industry Mgojo shared an estimated monthly earning of chief officer or master. “A rough estimate on the earnings of a mariner, who is high in the rankings per month can depend on the company you are with. But roughly it is between R 18 000. 00 – R 25 000. 00. This also depends on the number of days you are working. For example I only work for 15 days per month,” he shared.

Mgojo completed his Semester four (S4) in 2017. He is now planning on enrolling in the Master Port Operations program offered by Transnet.