Meet Londiwe Zulu, a sprightly and determined marine tug master. Her message to the young cadets who are returning from the Antarctica on Friday is simple: stay focused on your ambitions, work hard and the rewards will be good as you embark on careers in the maritime field. This is her story after she left the SA Agulhas a few years ago. 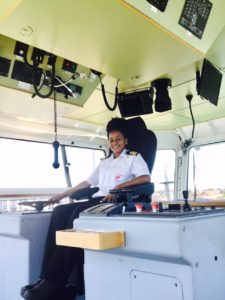 I stood next to the Prince of Wales

Londiwe Zulu, who is now a tug master in Richards Bay, once stood next to the Prince of Wales, His Majesty Prince Charles, on board the SA Agulhas, and shook his hands.

It was the biggest highlight of her life, she said, when her picture was splashed over the world media, when the SA Agulhas on which she was a cadet, berthed in Canary Wharf, London and the prince came aboard.

“It’s an amazing feeling to hob nob with royalty, explore the world, and do it because ‘its your job’,” said a cheeky 28-year-old Zulu, a mother of one, who was part of the first batch of cadets who joined Sir Ranulph Fiennes and his team on The Coldest Journey expedition to the Antarctica on board the SA Agulhas six years ago.

Born and raised in Richards Bay, Eskhakweni, Zulu grabbed the chance when she was able to transverse the Indian ocean, South Pole and England, obtaining life and technical skills on board the SA Agulhas.

After matriculating in 2007 she was awarded a bursary to be part of the Bidvest Panalpina Logistics Learnership programme. In 2009 Bidvest hired her as an in-port clerk.

In 2010 she went to Cape Peninsula University of Cape Town to purse her studies in the maritime field. Thus far she has completed her Semester one and Semester two courses and obtained Class three- an international ticket- which allows her to work on any vessel across the world.

At only 22-years-old, and having never travelled abroad, Zulu said the Coldest Journey voyage “transformed my life and made me fall in love with the sea”.

“This was my break in life. Coming from a rural village, I never knew a world existed like this on earth. There was hardly any people in the South Pole – in fact I read somewhere that there is just over 1000 people. I was also able to experience snow and ‘walking on water’. You get off the ship and it ice – which actually is water.”

“For me as a young person, this was the exposure that allowed me to think far and wide. I met Prince Charles. He came on board the Agulhas and greeted us. I was grateful because a lot of people only dream of this. Even people who have been working at sea for a long time. I thank SAMSA even today,” said Zulu.

Thriving in the maritime sector

After Zulu completed the cadetship programme she decided she wanted to work closer to home.

She enrolled in the Master Port Operations program offered by Transnet from 2014 till 2016, where she received her deck officers’ certificate.

Zulu now works at Transnet in Richards Bay, as a marine tug master.

Sharing a word of advice to aspiring cadets and calling on the youth to join her in the marine industry, Zulu added: “It’s a sector that needs young people because the opportunities are available. As for me, SAMSA gave me an opportunity and I did not waste it. So, once the youth get the opportunity they must grab it with both hands and it will be entirely up to them whether they use it positively or waste it.

Speaking about some of the perks of her job, she said those in the maritime field can earn handsomely.

Trainee tug masters could earn up to R 200 000.00, while those who are qualified could earn higher.

Zulu shared she wanted to complete her semester three (S3) and semester four (S4) in her maritime studies and eventually work towards becoming a harbour master. 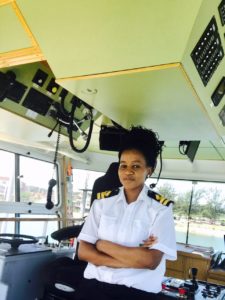