This weekend’s Tsogo Sun Amashova Durban Classic race will have a profound economic impact on the city and the province.

The race takes place between Pietermaritzburg and Durban on Sunday, and which will attract more than 10 000 local, national and international riders-and their supporters-is expected to boost the local coffers by a whopping R93-million.

Durban, South Africa: October 17, 2018 – This weekend’s Tsogo Sun Amashova Durban Classic race will have a profound economic impact on the city and the province, Phindile Makwakwa, the acting chief executive of Tourism KwaZulu-Natal has said.

The annual event, which will take place between Pietermaritzburg and Durban on Sunday, and which will attract more than 10 000 local, national and international riders-and their supporters-is expected to boost the local coffers by a whopping R93-million, she said.

“The Amashova-South Africa’s oldest classic cycle race-has become a flagship event for the province and it will do a lot to address seasonality and getting people that wouldn’t otherwise take trip at this time of the year to come to the region,” she said.

As a result, hotels between Durban and Pietermaritzburg would enjoy high occupancies during what was normally a quiet time.

“And this enables the province to build a lucrative tourism sector that will continue to create sustainable jobs for the people of KZN,” she added.

The Amashova, which started back in 1986 with about 150 riders cycling on the same route as the famous Comrades Marathon, has grown exponentially over the years, and this year, cyclists would be competing in four distances, including a new 160km extreme route.

Makwakwa said that the recent announcement about the Amashova’s inclusion in the famous Gran Fondo World Tour series, had placed the event firmly on an international standing.

The Gran Fondo (which means “Big Ride”) World Tour series takes place over eight months on four continents and the Amashova leg of the event will be the final race of the season.

“I am absolutely proud to say that the Tsogo Sun Amashova Durban Classic will be the first and the only race in the prestigious ten race line-up in the Gran Fondo World Tour to be hosted in Africa and we are looking forward to playing host to our international, national and local participants,” she said.

Some 200 international riders have participated in the Tsogo Sun Amashova race in previous years and now, top riders on the Gran Fondo World Tour series will be flying into Durban to join them.

According to the results of an economic impact study of last year’s race, commissioned by Durban Tourism, more than 50% of cyclists were from KZN, while 30% came from Gauteng, with most of the out-of-towners spending a minimum of two nights or more in the city.

The study also revealed that there had been a 7% growth in non-resident riders and a total average spend of some R3 282 per participant. This went on transport, food and beverages, entertainment, souvenirs, race fees and accommodation.

Makwakwa said that TKZN had supported the Tsogo Sun Amashova for several years as the organisation recognised the value of the event.

“The race not only promotes competitive cycling, but through the shorter and more social distances offered to cyclists, it also offers people from outside the province the opportunity to bring their entire families to participate and ultimately make this a wonderful holiday opportunity,” she said.

“We always encourage participants to take time before or after the race to enjoy some of our other tourism offerings and create long lasting memories as they take part in the excitement on race day as well as all the other festivities along the picturesque route,” Makwakwa added.

Race director Annie Batchelder said that “a great turn-out” was expected on Sunday, with a “significant” number of people coming from outside the province.

The organisers were grateful to TKZN and other sponsors for seeing the value of sports tourism.

“Apart from the excitement of our inaugural 160km race taking place with top international riders from the Gran Fondo World Tour competing, we are really looking forward to the ‘spirit of shova’ being alive and well in this year’s race,” she said.

Charles Preece, the chief operating officer of the regional Federated Hospitality Association of South Africa (Fedhasa), said the race continued to be a “feather in the cap” for the province.

“It’s a great occasion and another one of those very popular sporting events which brings visitors to the region, thus boosting our tourism industry.” 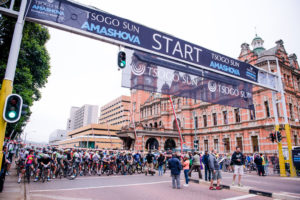