Today we profile the best hiking trails one can find in the majestic and green Drakensberg Mountains.

According to TripSavvy (https://bit.ly/2zjHbBx) the Drakensberg Mountain was listed one of the best Mountains to Trek in Africa.

Rainbow Gorge Trail is a beautiful wander into the verdant kloof. The route is a six-kilometre walk from Cathedral Peak Hotel. The trail follows the Ndumeni River upstream, winds through the green forest into a gorge, past some waterfalls and also yellowwood trees.
Duration: five hours

Lets go to Sugar Loaf. Put on your hiking shoes and start your journey at The Cavern. The path continues straight up the slope and is well marked. The path leads into the craggy Sugar Loaf Gap. Once one reaches the top their reward is the views of the valley from above.

There are numerious hiking routes that begin from Injisuthi Camp in Drakensberg, but the Injisuthi Battle Cave walk is a 11-kilometre return walk is the most accessible introduction to the mountain wilderness. During this walk your final destination is the Battle Cave. The cave has ancient rock art that is worth viewing. There are paintings of eland and also rhinos. There are directions to guide one on the route but it is best to walk with a guide.
Duration: five hours

The Giant’s Cup Hiking Trail is a five Day trail situated in the Southern Region of the Maloti Drakensberg Park. At over 60km in length and often above 2000m in altitude it traverses some of the most magnificent scenery found in South Africa. The trail begins 6 km past the Premier Resort Sani Pass on the left hand side of the Sani Pass Road and finishes five days later at Bushman’s Nek Hut which is 2.5km from the Bushman’s Nek Resort. The longest hiking day is just over 13km with the shortest being 9km.

The Gxalingenwa Trail is a short and extremely beautiful trail that begins over the road from the Golf Course at the Premier Resort Sani Pass and intersects with the Giants Cup Trail at the stunning Ngenwa Pool 3.5km later. The trail crosses the Gxalingenwa River a number of timesas it ascends the valley and there are a number of magnificent pools along the way.

The Icidi Gorge trail includes climbing Sentinel ladders and standing on the cliff with an additional break through Lesotho. One can start the hike following the Amphitheatre route until the mighty Tugela Falls. From there head straight to Icidi Gorge. There is no real path but the beautiful rolling grass plains made for relatively easy walking. Do carry a map and have decent maps and navigation skills.

The top of Icidi Gorge is just grass plains. From here, you can follow the valleys to Mnweni Cultural Centre (about 30 kilometres from the top of the gorge). It a must try if you’re a person who loves adventure.

The Icidi Pass is regarded as the most difficult non-rock pass in the entire Drakensberg; not attempted lightly.

It looks treacherous, but for fit hikers with a head for heights, the trail to the is straightforward. Of course there a series of zigzags to the the final destination. The route includes walking on a weathered track to where the Tugela River cascades off the escarpment to form the second-highest waterfall in the world. Inexperienced hikers should take a guide

The are those who regard this route as one of the most beautiful passes in the Drakensberg and among the best hikes in the world.

The Bell Traverse contours below the Cathedral peak range of mountain peaks with incredible views out over the Mnweni and Cathedral valleys.

To add a thrill element to the trail a lot of the path is so narrow that it literally follows alongside a series of sheer drops.

Hikers do the Bell Traverse in either direction, taking the Cathedral Peak path through Orange Peel Gap and up Bugger’s gully, or from Mike’s Pass via the Organ Pipes and Twins Cave.

It is a long and gruelling trail across to the Organ Pipes Pass, rewarded in no small way by the scenery, which is nothing short of spectacular. Once on the pass you are in the neighbouring country of Lesotho, where you pitch tent on the escarpment looking down into South Africa.

A steep climb to Cleft Peak, one of the highest points in the Drakensberg, from which there are unequalled views. A descent into the Maloreng Valley is steep, before heading up over the Elephant and into the Kwakwatsi Valley. Twins Cave is your overnight shelter.

Day three: Twins Cave – Cathedral Peak Hotel
This is what hikers refer to as the Bell Traverse – the route from Twins Cave. The exceptionally beautiful route takes in the Mitre, Chessmen, Inner and Outer Horns, the Bell and finally the intimidating Bugger’s gully.

8. Mnweni Pass and Rockeries Pass
This trail is well known to explore the most beautiful parts of the Drakensberg. The first day is spent walking into the high hills below the escarpment, with a stay overnight at the base of Fang’s Pass, alongside the junction of the Mubudini and Mnweni Rivers.

Start early the next morning, and continue up the banks of the Mnweni River until you reach the pass. Highlights include passing small streams, and enjoying the scenic views of the rolling hills. Along the trail one will also pass down Rockeries Pass and the Thonyelana River before heading back to the beginning of the trail.

If you have used one of the trails listed above feel free to share your experiences and images with us. We would love to hear from you. 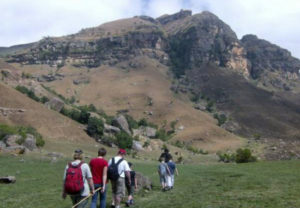 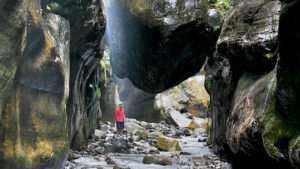 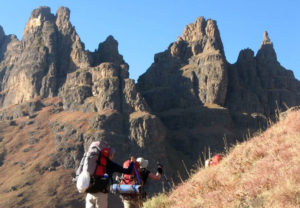 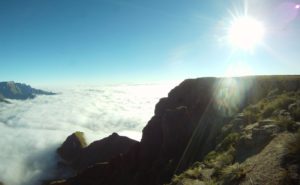 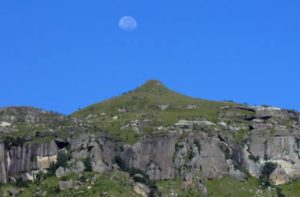 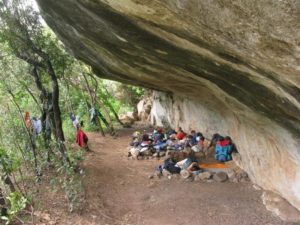 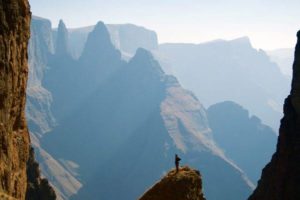